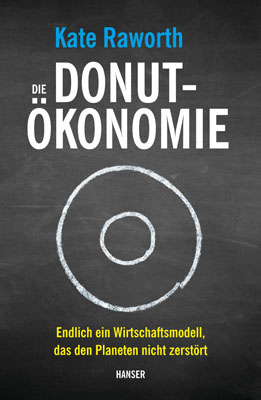 It's time to rethink economics!

Kate Raworth, a true world citizen, describes seven basic approaches that change the way we think of economics.  Using a novel economic model, she makes clear that our economic actions must consider the society's social foundation and ecological limits of the world.

The challenges of the 21st century are characterized by poverty, unemployment, growing economic insecurity, rising inequality, climate change, environmental disasters and pollution. These challenges are exacerbated by worldwide population growth. Building material and consumer goods are demanded by more and more people. This begs the question: what kind of thinking does humanity need to meet these challenges? What is the role of economic actors? Are leaders aware of their responsibilities?

As a solution, Kate R. presents her vision, of a new economy and a better world. The key metaphor, which Raworth uses, is a donut. The donut itself represents the safe and equitable space for humanity. Outside of the donut, the desirable space gets exceeded because the environment gets destroyed, which makes living on this world impossible. The hole in the inside represents the social foundation of our society which must be maintained to guarantee a happy life for everyone.

This book manages to represent many alternative economic models in one. It shows new ways of thinking and leads to the conclusion: We are all developing countries! We need development which respects the planetary boundaries while meeting the needs of our society. For this, each country must take an individual path.

The donut economy is just becoming a movement, it shakes up and gives courage for the future!

Tripl3Leader recommends this book to leaders who want to address the challenges of the 21st century. On the path to becoming an effectively sustainable leader, Kate Raworth's work is a holistically valuable boost.

You can order it directly with the button next to it. We wish you a lot of inspiration!