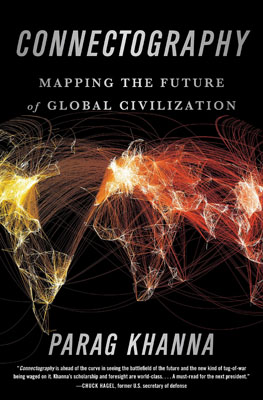 Connectography offers and literally maps a new understanding of the connections that shape our world. Parag Khanna describes how the planet continuously changes from being defined by borders, nation-states and static societies and economies towards a world characterized by more connection, less borders and a higher volatility.

This book identifies key elements that characterize a new global civilization. The first is connectivity. Technical advances, changes in societies and more powerful economic interest increasingly connect all parts of the world. This leads to more complexity. The second element is the supply-chain. Supply and demand-dynamics are an age-old force that is now stronger than ever due to higher possible volumes of trade and connectivity. Supply chains shape the face of cities and regions, create Special Economic Zones (SEZs) and might be an instrument to improve undeveloped nations’ situation. A third process that is identified in the book is the devolution of territories. With the declining relevance of nation-states, smaller entities like SEZs, regions and cities gain in importance and independence. The future thus looks more fractured and decentralized. Yet, Khanna states that these smaller clusters will aggregate to federations in a more peaceful and prosperous way than the nations with arbitrarily drawn borders we have at the moment. A fourth change will be seen in how power is exerted in the world. The author believes that there will be less fighting on the battlefield and more economic pressure applied as leverage, fewer wars and more tug-of-war-like situations. The ideas are illustrated through many examples from China, Africa and the U.S.A. Khanna sees a solution for Africa’s struggle in connecting the continent to the international supply-chains while having reasonable regulations. For the United States he recommends reorganization in SEZs and regions ( e.g. Pacific Coast, Southeast Manufacturing Belt) and investing in better connections between those specialized clusters. China, with it’s many industrial hubs, good infrastructure and directive government shows high resilience and can be partly seen as a model for less modern economies. The characteristics and illustrative examples are visualized through several maps. Those maps help leaders to re-think and re-focus on what is and will soon be important to their entrepreneurial success. That is, less of the de jure state boarders and more of what is de facto mattering socially and economically: connections, trade routes and cities.

This book is relevant for leaders because it identifies the dynamics responsible for many changes in the world, it encourages businesses to become less dependent on aged perceptions of economic sovereignty of the state and to connect to the world markets freely. The boundaries of doing business are broken up through connectivity and this will continue into the future leading to a new global society according to Khanna. Sometimes the author seemed slightly too confident in the applicability of his concepts and switched from analysing issues to a more narrative tone. Nonetheless, Tripl3Leader recommends Connectography due to its novel and accessible explanation of a difficult and disputed topic – the future of how we live, make business and connect.