This Changes Everything – Capitalism vs. the Climate 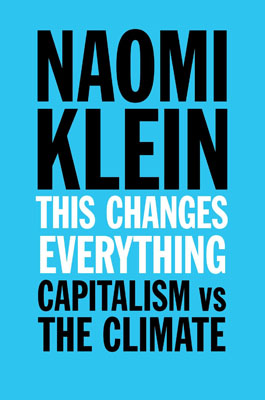 After ‘The Shock Doctrine’, bestselling author, Naomi Klein, presents a book, which comprehensively deals with causes, consequences and solutions of climate change.

The author accentuates the fight against inequality as a central strategy against climate change, by contrasting the infinite growth imperative against the finite resources of planet earth and thereby opposing the predominant form of capitalism. She calls for a reversal of the privatization in the energy sector, as well as for an end of austerity policy. According to Klein, we need more government intervention and laws, which force the greatest polluters to pay for the fight against climate change. Furthermore, she repeatedly emphasizes the danger of waiting for a technological miracle to eventually save the planet. Concrete actions, such as the uprising grassroots movements of local communities, which are networked globally, are urgently needed. The book reaches its peak when Klein points out that we have to focus our efforts on the emerging countries, helping them to develop differently than the industrialized countries did in the past, by transferring know-how and monetary funds.

There is no need to be concerned, however, this book is not about dry economic theory, as the title might suggest. It entails the necessity of abolishing the traditional economic, profit-oriented thinking and building a system based on sustainable values and morale. Besides the persuasiveness of thoroughly researched facts, Klein uses personal anecdotes, which, not only personalize her arguments, but, most of all make them understandable and touching. She shows that, in the face of an existential crisis, climate action could provide a catalyst for a better world. A minor point of criticism should be mentioned regarding the perspective of the book, which is based on a North American point of view to a large extent.

In general, Klein brings the reader down to earth regarding the current climate debate, by clarifying the gravity of the situation. Thereby, she not only disproves climate change deniers, but also disenchants some of the big green movements and promises, which are not what they appear to be. At the same time, she points out to a beacon of hope and positive prospects. If people begin to immediately accept and face environmental pollution, by simultaneously addressing the twin crisis of inequality and climate change, then This Changes Everything…

Tripl3Leader recommends this book to leaders who want to gain deeper understanding of one of the most extensive challenges of our time, which will inevitably confront every single one of us. Not only does it give valuable information on the dangers and opportunities of the current situation, but it also points the way of a profound development towards a new world order.